Skip to content
HomeIt Can Happen In Church, Too!

Historically, today, All Saints Day, is a holy day of obligation in the church. As a kid I could recite each of these days of mandatory attendance at mass, because they were emblazoned on our brains through constant repetition as we memorized our Baltimore Catechism. I looked them up just now on Google, and sure enough, I remembered them–in order.

Holy days of obligation are not the only days that we attended mass on a day other than a Sunday. Over the years there were many a weekday evening mass during Lent that we would also attend mass. For anyone who has been to a Catholic mass, you know there’s a point at which someone from the congregation gets up to offer “the gifts” to the priest. Here’s what happened during one of those weeknight masses when I was probably about ten years old. 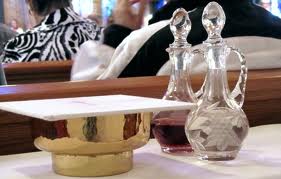 My mother, turned to me and said, “Kelly, go help Mrs. Duffy take up the gifts.” I told her I “didn’t feel so good”. In reality I was completely nauseated and felt as if I was going to vomit at any moment. through gritted teeth my mother sternly whispered, “Get. up. and. help. Mrs. Duffy.” So, I stood up, made my way to the end of the second-row pew where we always sat, reached for the two small glass cruets holding the water and wine, and proceeded to the edge of the altar with Mrs. Duffy. I knew something was about to happen but I had no really idea that it would be so, well…so messy.

As I handed the cruets to Fr. Shelly and without missing a beat, I promptly vomited on his shoes. From what I remember, my horrified mother was beside me within seconds escorting me out the side door. I do remember being scolded for having just thrown up on the priest and saying, “But I told you I didn’t feel well!” I was handed off to another mom, our neighbor from across the street, who took me home.

My guess is that my brothers and sisters who may have been at mass that night with my mother and me, will have different recollections of what exactly happened. I’m sure I didn’t think of doing it when I was ten years old, so now I’m thanking: Mrs. Duffy–for cleaning up my mess off of Fr. Shelly’s shoes and Mrs. Tally for taking me home.

3 thoughts on “It Can Happen In Church, Too!”