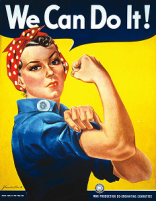 On Facebook this week I received an invitation to join #Pantsuitnation (more info here). Although I’d heard about it prior to election day and knew it was meant as a visual way to support the first woman candidate for President and her particular fashion style; I assumed it would have gone by the wayside after election day. Clearly it has not, so I did some homework.

Activist movements have almost always been initiated because one person  wanted to start small to meet a need for themselves and a few others in their circle. Then, word gets out; and, as the commercial for a popular shampoo goes…”they told two friends, and they told two friends, and so on…” A flicker of an idea turns into flames! Clearly #Pantsuitnation has caught fire, with chapters popping up in every state!

Now that the votes are in, it appears that the focus of this grassroots effort is now a place for women who are concerned (worried, fearful, angry, called to action) about the impact the election’s outcome will have on us, as well as many other marginalized groups in this country, to join forces. It’s a place to come together to share concerns and ideas; to organize. Not to organize against the election’s outcome per se (though many will do that), but to move forward in a way that ensures members or our citizenry who are the most at risk of suffering the potential consequences of this election, will either not suffer or suffer less.

There’s an organizing meeting tomorrow, I may go check it out. Is this the route for me to somehow impact my immediate world I live in a meaningful, long-lasting way? I’ve often considered myself to be a better “behind the scenes” type, not the public face of anything. Maybe in #Pantsuitnation there’s a way for me to do that, to help to strengthen local leadership opportunities and networks for women.

Today, I am grateful for the women who lead the way for me to be where I am today; to be in a position where I can publicly even consider joining a group like #Pantsuitnation.