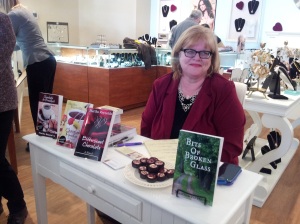 Martha has been friends with my sister Sue since they made their first communion together;  it’s been a long time!

Over the years Sue would touch base with Martha, running into each other downtown or at a high school reunion.  Sue would report back to us on Martha’s life events; as we all do when we run into former classmates.  I recall my sister telling us when Martha got married; a later-in-life bride they call it.  Since I was unmarried at the time, with no prospects in sight, I was thrilled to hear of Martha’s joyful marriage.  It gave me hope.

When I got married (at age 42), Steve and I moved to Warwick and found that Martha and her husband were our neighbors.  The first time I chatted with her, Martha was walking her dog. We talked for a while in the middle of the street. I told her how I was happy she’d stayed in touch with my sister.  I also went on to tell her how I admired her–that she was my role model for women who did career then marriage.  We’ve each moved out of that neighborhood, so I don’t get to see Martha or Jim walking their lovely little dog; and don’t often have a chance to catch up.

This morning, my sister Sue called to ask if I wanted to go to Martha’s book signing at a local gift and chocolate shop (Sweet Twist) — a completely appropriate choice give the titles of Martha’s books.  She self-published a sweet series (pun intended) of books, as well as one other novel.

All wonderful stories, rich characters, and plain old good reading!  I brought my four books with me to capture what I’m sure, some time very soon, will be a very valuable autograph.

Several years ago Martha “quit the rat race”, as the saying goes, to pursue her passion for writing.  She’s experienced some terrific success in a short time.  Today’s thanks goes out to Martha, she’s become one of my favorite authors, and continues to be one of the women I admire in this world.