I did my first bit of holiday shopping in an actual store today. I’m an on-line shopper for the most part, particularly when it comes to Christmas shopping—Amazon.com it my go-to site, for almost everything!  I swore years ago that I wouldn’t venture down Route 2 (in Warwick), where the majority of the major shopping is done where I live, any time between Thanksgiving and Christmas.  There are other times of the year, too, when traveling down this less than 2-mile stretch can take as long as 30 minutes.  For some people who read this it may sound like such a long time, but in Rhode Island that amount of time could almost require a stop for a bathroom break en route to your destination. 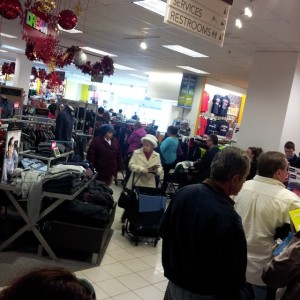 Indeed though, I did stop today, at several stores along the route, one of which was a Kohl’s.  I actually needed to return something that I ordered on-line and its typically easier to do in the store.  Once I’d made the return I knew I would look around to see if there were any “must-haves”–which I did.  I found four items that I was willing to purchase, three of which were for gift giving, and I made my way to the rather long line to get to the register.

For whatever reason, the line on the men’s side of the store always seems to be shorter (sound familiar?) and today was no exception.  You can see from the picture, I was a good distance from the register.  No matter I thought, one of the reasons I enjoy shopping at Kohl’s is there are always nice people to talk to while waiting the 20-30 minutes in line to get to the register.   As we inched slowly toward the light, the line wound its way through the “impulse-buy” shelving.  The woman behind me and I commented to each other about many of items on the shelves while we talked about how we’d each had to send packages out of state for grandchildren who live in other parts of the country.  We also rolled our eyes at each other in response to that one person in line who always makes such a big deal of waiting–you know the one!

When my turn at the register came, I looked back and wished her a happy holiday and she did the same.  Today’s thank you is for all the nice people I’ve met all these years of waiting in line while holiday shopping.  I hope their holidays were/are merry and bright!

One thought on “No Lines, No Waiting…No Chance”