Tonight my twenty-something niece is hosting her first holiday party, from the looks of what’s posted on Facebook it might just be her first “grown-up” hosting.  It reminds me of the time I first hosted a holiday event.  I was living in Vermont in the early 90’s and there were quite a few of us who were not going to be able to get to the Thanksgiving dinner…no turkey smells, no cooking pies wafting through the air; inconceivable.

The bunch of us who hung out together, and worked together, decided we would share responsibilities for cooking a complete and entire turkey dinner.  There were roughly 14 people who would be joining us in my two-room apartment.  We moved the kitchen table from Liz’s apartment and moved it into my living room; her table tucked up next to mine, with various rocking chairs, a loves eat, and a few actual kitchen chairs, comfortably sat all of us. 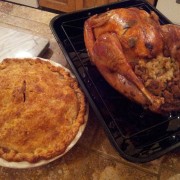 Not only was it the first time I cooked a turkey, it was certainly the first time I made gravy to go with it.  I’m personally not much of a gravy eater so didn’t think about how to make it until someone asked if there would be any.  I tried to remember how my Mom would get things ready on Thanksgiving day.  I’d watch her make the stuffing every years so there was no need for a recipe.  The gravy on the other hand, I was clueless.

The Betty Crocker cookbook I owned had a recipe for turkey gravy, using cornstarch as a thickener, so I gave that a try.  I’ve been known to be somewhat impatient–apparently making gravy is not a race and patience is the key to success.  When it appeared the gravy was not getting any thicker I would add a little more cornstarch, when it got too thick I’d add more broth…and so it continued.  By the time I was “done” , I had transferred the liquid into a bigger saucepan, and, when all was truly said and done, the wooden spoon I was using to stir with was standing straight up in the middle of the brown goo in the pan.

Dinner guests had arrived and I was pleased with how the apartment looked and smelled.   There were plenty of munchies prior to the main  course and dessert items filled a card table in the corner.  When someone asked for the gravy I poured what I could into the serving dish and passed it along.  While I was just slightly horrified, the dinner guests were lovely about “pouring” the gravy on their mashed potatoes.  “It has good flavor,” someone said.

Today I want that those gracious guests for choking down my sorry excuse for turkey gravy.  I have since learned how to make a smooth, velvety, perfectly seasoned treat, to cover the aromatic slices of turkey, the mound of stuffing, and mini-mountain of fluffy white mashed potatoes.  Enjoy!

One thought on “Gravy and the Wooden Spoon”