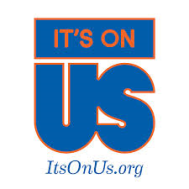 I wouldn’t have thought much of it except that while I was watching the Road to the Final Four, there were so many PSAs  played during timeouts it was hard to ignore (I know, that’s the point of PSAs).  Also, as it happens at the beginning of that week my friend Eileen called me.  I wrote before about Eileen and the horror her daughter experienced on the very same college campus that had brought me such joy, friends and happy memories.  “K”, as I referred to her, has started her own blog, telling her story and healing from the trauma.  Knowing who her Mom is tells me that K was likely a strong woman when she was assaulted and reading her blog let’s me know that I wasn’t wrong:  she was and, more importantly, is a strong, capable, smart, lovely, caring young woman.

When I spoke to Eileen a couple of weeks ago I got a bit more of the background on the story.  I found out who on staff at the college was not helpful, in fact downright insulting; and who was beyond supportive to Eileen, K and their family.  I was not at all surprised to find out it was my friend Deb, the school’s nurse, who took care of K, and Eileen.  In fact, Eileen told me that one of the reasons Deb may have left her job at the college was because of the abhorrent behavior of the institution’s leadership and lack of urgency around the issue of K’s assault, and assault on campus in general.  Again, not surprised since Deb is one of the people in this world who acts with such compassion and integrity every moment of her life!  (Thanks Deb, xo Kells)

The other thing Eileen and I talked about was a film, The Hunting Ground,  recently released and billed as: “a startling exposé of sexual assault on U.S. campuses, institutional cover-ups and the brutal social toll on victims and their families that speaks directly to and about the rape culture on college campuses.”  It’s not one of those films that’s at your local multiplex, you have to go to the website to find a screening.  I hope to see it some time soon.  For today, however, what I want to do is thank the makers of the film and those who’ve been victimized on campus for standing up and making an effort to raise awareness and change the culture.  You are brave souls!

One thought on “It’s On Us”